How to Spice Up the Championship, Part II

Great.  Danica Patrick has re-signed with Andretti-Green Racing (name change tba later) for three years, according to Curt Cavin at The Indianapolis Star.

So now we can all put this behind us and move on.  Well, at least until Tony Stewart pops off again and then everyone can whip themselves into a frenzy speculating on the details of Patrick's contract and where she will be in 2013.

However, I say let's use Danica's signing as another way to pump up the championship at Homestead-Miami.

After the jump, you will find out how I plan to blow this out.

(In my mind, I picture it like the surrender of Japan on the deck of the USS Missouri in 1945, which is at right.) 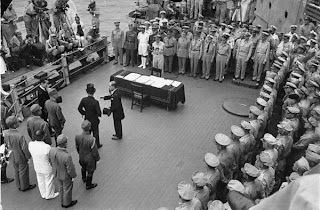 At the table sits Danica Patrick, newly re-signed with AGR.  She is surrounded by her fans.  During the press conference she repeatedly makes references to the fans, saying:


"This is why I want to be in IndyCar.  I want to connect with my fans and inspire the next generation of racers."

All the little kids at the press receive autographs from Patrick.

Terry Angstadt or whomever is actually in charge of the IndyCar Series.  A reporter asks:


"Why make the big deal of Danica re-signing?"


Angstadt (or whomever is in charge) says something to the effect of:


"We're here to compete with NASCAR.  No longer will our series provided up-and-coming young American talent that leaves to go to another series.  We want to keep our drivers and continue the growth of the IndyCar Series."

Angstadt also takes the time to announce a title sponsor - Phillips-Van Heusen.  While not the sexiest name on the market, it will put IndyCar-themed merchandise in all of its stores across America, including the continuation of the Izod line of IndyCar clothing (designed better, of course).  IndyCar drivers will be utilized for ads and promotions with Calvin Klein, Izod, Arrow, etc.

Wrap up the press conference with fireworks, celebrating the continued success and growth of the IndyCar Series.


For Part I of How to Spice Up the IndyCar Championship, click here.

Labels: 2009 Homestead-Miami, How to Spice Up the IndyCar Championship, Marketing