Life on the Road

11 days since I've written on here.  That's probably too long in the blogging world, especially given the amount of IndyCar news that has come out in the last 10+ days.

The nice part about the IndyCar season is that it occurs in the summer, when my work load is far less; once Labor Day rolls around, I'm in the vast world of sports information, working with six of IUPUI's 14 sports as their media contact.  What makes it so busy, especially this time of year?  Well, here's a sample of what I've been doing:

The Car Count Goes Up (kind of)

According to the Indianapolis Star, Penske Racing will confirm today what most suspected: Will Power will drive a third car on a permanent basis for the team.  Power, who won in a cakewalk at Edmonton and was fifth at Indianapolis, drove on a part-time basis for Penske last year.

In theory, and if I'm doing my math right, the car count is at least sustained from where it was last year, and for some races (ones that Power missed in 2009), it goes up.  Which is good.

UPDATE: Here is the release from Penske Racing.  Power will be sponsored by Verizon Wireless and drive the No. 12, which he did last year at Indianapolis after Helio Castroneves returned to the track (In other races, he drove the splendid-looking yellow Penske Truck Rental car).

Winds of Change Continuing to Blow at IMS?

Already the Indianapolis Motor Speedway has made some major changes since the announcement of the IZOD IndyCar Series sponsorship agreement.  For many, it was the most public that IMS President Jeff Belskus has been since taking over control of IMS over the summer.

In the last couple weeks, Belskus has been trimming the fat from IMS, including IMS Director of Public Relations Ron Green (which, as a sports information director, saddens me to see him go).  Now, the Indianapolis Business Journal's Anthony Schoettle is speculating on Belskus' next round of cuts/adjustments not only for IMS, but for the IZOD IndyCar Series.

Among Schoettle's hypothesis as to what may be coming are:

Interesting stuff from Schoettle, as usual.  You can read the full article here.
Posted by BP at 1:56 PM 3 comments:

So if you were listening to Trackside with Curt Cavin and Kevin Lee (and really, what else would you be doing from 7-9 p.m. ET on a Thursday?), you may have heard my voice around 8:30.

Thanks again to Trackside for hosting blogger night - their embrace of their listeners, bloggers and their opinions has really fueled the success of the show, in my opinion.  So thanks to those two.
Posted by BP at 8:40 PM 3 comments:

How Could Comcast's Acquisition of NBC Affect IndyCar?

According to AOL's finance page, Comcast and GE are nearing an agreement in principle on the value of NBC-Universal - $30 billion.  It's a complicated deal, and there are several roadblocks that will need to be cleared before Comcast (who owns Versus and the Golf Channel) takes control of the Peacock Network.

But if this deal does transpire, how does this affect the Izod IndyCar Series, which airs nearly all of its races on Versus (with selected races still airing on ABC, including the Indianapolis 500)?  We've taken a stab at it before, but let's try and tackle how the Izod IndyCar Series can continue its forward momentum if Comcast were to buy NBC-Universal.

Even without the benefit of sound for this afternoon's Izod IndyCar Series press conference, you could notice the excitement in the press room at the Indianapolis Motor Speedway.  The runway-styled press conference helped reinforce the relationship between Izod and the IndyCar Series moving forward.  Seeing IMS President Jeff Belskus for the first time in what seemed like months was a nice touch, as well.  Between Belskus, Brian Barnhardt and Mike Kelly, everyone said the right thing.

To me, though, lying just under the surface of the title sponsorship is a major key to the deal: the IndyCar Series is aligning itself with a high-profile, yet middle-class sponsor.

(Well, that and the fact that it appears that Ryan Hunter-Reay will drive for Andretti Racing in 2010; on a day when one young, popular American driver continues her dalliance with NASCAR, it's nice to see another young, talented American driver staying in the Izod IndyCar Series.)

Most of Izod's line of "Izod for Indy" clothes are relatively affordable - making it a key to activating the sponsorship.  I am right in Izod's demographic (I think) - a 27-year old young professional.  Now, for a minute, let's just say that I didn't know anything about IndyCar racing.  With Macy's locations around  the country, odds are that I'll run into the Izod for Indy product sooner or later.  The biggest thing about the line, to me, as someone living on a limited budget, is that if I liked the vintage Wing-and-Wheel design, I could actually buy the shirt.

As opposed to some other sponsors of the Izod IndyCar Series (i.e. Ritmo Mundo), the average fan can find this product and buy it.

Yes, the other details of the announcement are quite intriguing (my comments in parenthesis):

Driving home from work today, I listened to Terry Angstadt on local radio today (1260-AM, WNDE) - his comment was to the effect of:


It might not be as important a day as unification, but it's close.


If the Izod-IndyCar relationship grows as expected, it may be even more important in terms of securing the future viability of American open-wheel racing.
Posted by BP at 7:45 PM No comments:

A Shot Across the Bow

There is no peace. The war is actually begun! The next gale that sweeps from the north will bring to our ears the clash of resounding arms!


Who knew that sections of Patrick Henry's speech to the Virginia House of Burgesses would apply 235-or so years later?  With ESPN and NASCAR continuing to float the rumors that Danica Patrick will sign a deal to drive the soulless Minor League cars and trucks of NASCAR, it's a pretty obvious attempt to steal some of the thunder away from the IndyCar Series' announcement about signing a title sponsor.

Now, I'm not going to spend any time wringing my hands over who is leaking the information, when it's being leaked at specific times (it does seem similar to the Chinese Water Torture-level of baseball and steroid-related leaks, though) and the reasons why.  Por que, you ask?  Because, for IndyCar fans, today is a day to celebrate, just as another major press conference back in February of 2008 was a cause to toast IndyCar racing.

Today, watch it here, and know that the IndyCar Series is taking another step back into the public conscience with their partnership with Izod.  The die has been cast, the Rubicon crossed - the IndyCar Series is not going to fade away, the Indianapolis Motor Speedway will not be sold.  And NASCAR's place as America's most popular form of auto racing is hereby under assault.

The war may not be won in a day, a month or a year.  But slowly, with a unified series and strong sponsorships (like Izod), the IndyCar Series will be back.  And hopefully, we will look back on this day as one of the major steppingstones in the process. 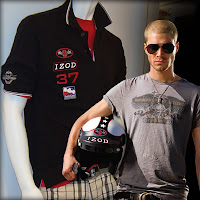 Per the omnipresent Curt Cavin, Izod will officially be named the title sponsor of the IndyCar Series in a press conference on Thursday.  I saw Mr. Cavin at the IUPUI Basketball Banquet on Monday afternoon, so kudos to Curt for burning up the phone lines after the banquet to break the story.

For all of the recent talk to 'how can the IndyCar Series attract new fans?' making the Izod the title sponsor seems to be one sure-fire way to do so.  For all of the sponsors the IndyCar Series has, Izod seemed to be at the front of the line as far as sponsor activation goes.  In virtually every market the series goes to, Izod was hosting a signing, fashion show, or both to promote their relationship with the past, present and future of the series.

Say what you will about the line of clothing Izod put out (I for one thought the shirts were overdone; simpler is better to me), but if they continue to aggressively promote the series (i.e., creating more than one commercial), this is a relationship that can continue to move the IndyCar Series towards mainstream America.