The Hidden Points of Edmonton

First, it's been nine days since writing, which doesn't sit right with me.  I apologize - between transitioning jobs and the IZOD IndyCar Series closing the season on a bye week-race-bye week schedule, I just haven't had much to write about.

With that in mind, it's time we thoroughly examine something we have been harping upon for the better part of three weeks: the hypothetical scenario in which Helio Castroneves would be a championship contender if he had been given the win at Edmonton.

Looking at the numbers, if Castroneves had been awarded the win at Edmonton, he would still be out of the points title, trailing by 51 points entering the season's final race at Homestead-Miami.  In our mock results, Castroneves took first and 50 points, with Scott Dixon being awarded second and the 40 points (if blocking wasn't called on Castroneves why would it be on Dixon?).

With Will Power finishing third and receiving 38 points (for the pole and laps led bonuses), he held six more points than Dario Franchitti, who was fourth in our scenario, picking up 32 points.

Thus, in our mock standings entering Homestead, Power is the series points leader with 582 points; the Australian is actually the loser in the points rearrangement, as he leads Franchitti by just 10 points instead of the 12 he will carry into the series finale.  By moving from 43 points to 38 (while Franchitti went from 35 to 32), Power would be in a similar, but more precarious situation.

Castroneves would hold a 44-point advantage over Dixon for third, sitting on 531 points.

For Castroneves, it isn't Edmonton that served as the death knell for his season; instead, it was the wreck with Vitor Meira at Toronto that threw his championship aspirations out the window.  With a car capable of running up front, Castroneves jumped the gun on a pass of the slower Meira in an attempt to retake the lead - when the pass failed, Castroneves was out of the race with 12 points to show for it.

So instead of wondering where Castroneves would stand without Edmonton, perhaps its time to focus on how the points standings would be different for both Power and Franchitti if they had finished behind Castroneves in Alberta.
Posted by BP at 6:36 PM No comments:

Breaking Down the 2011 Schedule

Last week, the IZOD IndyCar Series announced their 2011 schedule, minus a season finale.  We were live in Milwaukee to cover it for SB Nation Indiana, taking the series' plane to the Milwaukee Mile.

My impressions of the venue will be included as we break down each and every one of the 2011 IZOD IndyCar Series races.
With 8 ovals and 9 road/street courses, the schedule once again features the strong balance that was the hallmark of the halcyon days of open-wheel racing.

My only quibble with the schedule is the number of weeks off throughout the year, but until the IZOD IndyCar Series finds more tracks that want to host and market the series (which it appears to be building momentum towards), it makes sense to limit it to 18 races on 17 circuits.
Posted by BP at 7:12 AM 1 comment:

On Tuesday, More Front Wing's Paul Dalbey and I were trading ideas via twitter on throwback liveries.  That got me thinking: which cars from IndyCar's glory days would we most want to see recreated for a race?

In no particular order, here are a few: 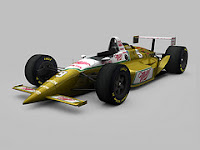 The Land of Brats and Beer

After a one-year hiatus, the IZOD IndyCar Series is headed back to Milwaukee.

A driver's track, the short oval gives the series three such tracks now - New Hampshire, Iowa and Milwaukee.  Drivers have been clamoring for more "driver's tracks" that require more than holding the gas down for two hours.

The full schedule release will be done from the Milwaukee Mile on Friday, but it appears that the series will have a 8/9 oval/road & street mix.
Posted by BP at 10:28 AM No comments:

Actually, I've never lived in Kentucky.  And I've told my share of Kentucky jokes.  When you grow up in Indianapolis, you do those sort of things.

But I'll give Kentucky credit for building one helluva racetrack.  Kentucky was my first non-Indianapolis race, as I soaked in the excitement of 2- and 3-wide racing and the duel between Good and Evil Ed Carpenter and Ryan Briscoe.

And while I can't make it to Kentucky this weekend (a major disappointment), I can still preview the race with words (note, this also runs on SB Nation Indiana):


After their 86th IZOD IndyCar Series race decided by less than a second (in 199 events), the series heads to Kentucky Speedway, site of one of the most exciting races of the 2009 season.  0.0162 of a second separated Team Penske Ryan Briscoe and underdog Ed Carpenter.  For Carpenter, the win would have been the signature (and only) victory of his career.
The 1.5-mile oval is similar to Chicagoland Speedway, where pack racing dominated most of last weekend's night race; more is expected at the track just south of Cincinnati.
2009 Winner: Ryan Briscoe.  The Australian dueled with Carpenter over the final laps, each utilizing their push-to-pass button throughout and keeping fans on their feet.
Briscoe's season has not gone as smoothly as last year's when he came within a few laps of the series championship.  He qualified on the pole at Chicagoland and ran up front throughout until his last stop put him back in the pack.
What to Watch:  Don't take your eyes off the lead pack.  Having been in attendance at Chicagoland, I can vouch for the addictive nature of watching 10-12 open-wheel cars moving at 200-plus mph within inches of each other.  Kentucky should feature more of the same - it did last year until late pit stops separated the field.
Who to Watch: Carpenter.  The 29-year old was inches from a career-defining win at Kentucky in 2009.  One wonders if he had won the race if he would have a full-time ride in the IZOD IndyCar Series this season.
When Carpenter has run, he has been competitive.  At the Indianapolis 500, he qualified in the third row and was running near the front before a (dubious) blocking penalty brought him through the pits.  At Chicagoland, his car was once again at or near the front, only to be felled by mechanical troubles.
When to Watch: Versus has the coverage of the race, beginning at 8 p.m. ET (find Versus in your area here) on Saturday night.  Indycar.com will have streaming of practices, qualifications and the Firestone IndyLights race.
Posted by BP at 10:04 AM No comments: