IZOD Clothing Is In 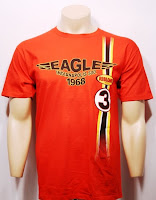 Head over to the Indianapolis Motor Speedway store.  Click here.  You'll notice that the 2010 IZOD IndyCar line of clothing, based on the "glory days" of IMS and open-wheel racing, is now available.

Not sure if everything that IZOD will be putting out is available yet (some is pre-order), but it's just another sign of how IZOD is committed to marketing the IndyCar Series.
Posted by BP at 11:03 AM 1 comment:

All in the Family

Listening to the IMS Radio Networks' call of the Honda Grand Prix of St. Petersburg, Jake Query broke the story that John Andretti will drive the fifth car for Andretti Autosport at the Indianapolis 500.  A press conference will be tomorrow at IMS, per Query.

The AA machine was already one of the 500-only programs being counted on, but it's reassuring to see it will come to fruition.  As far as 500 entries go, The Indianapolis Star's Curt Cavin thinks up to 40 cars could be qualifying at Indy.
Posted by BP at 12:34 PM 5 comments:

Hail, Hail to the Good Times

Well, since we mentioned that Sunday's Honda Grand Prix of St. Petersburg feels like the beginning (again) of the 2010 IZOD IndyCar season, this seems appropriate:

It's Time to Go Racing (Again)

Are you ready for the IZOD IndyCar Series to resume its season?

While it has only been two weeks since the opener in Brazil, but due to the return from Sao Paolo, it feels as if much of the momentum from the race (remember - late passes for the lead, numerous strategic decisions, torrential rain, and a massive wreck) has been blunted, or at least slowed.

This is one of my biggest complaints with the IndyCar schedule, but I understand why it is necessary.  (Unfortunately, the announcements of a panel for the ICONIC 2012 chassis and Robin Roberts as Indianapolis 500 pacecar driver won't cut it for most people as far as news goes - oh and Graham Rahal is probably going back to Newman-Haas-Lanigan).

In some respects, the slowing of momentum after Brazil makes this week's Honda Grand Prix of St. Petersburg feel like it is the season-opener for the Izod IndyCar Series, for a few reasons.

One, the race is on US soil, which means the full broadcast crew will be at the track.  Viewers don't have to worry about the transmission signal from Brazil back to Indianapolis this week.

St. Pete served as the season-opener a year ago; and as far as racing goes, it was remarkably similar to this year's Brazil race (minus the whole Mario Moraes bodyslam on Marco Andretti's car).  It was a Penske driver (Ryan Briscoe in this case), who made a late-race pass to claim the win.  And Ryan Hunter-Reay was a surprising podium finisher last year, just as he was in Brazil. 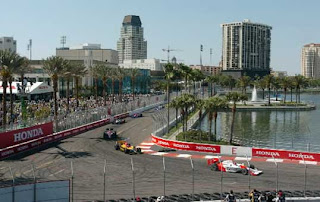 To me, St. Pete, along with Long Beach, personifies street-course racing in America; on a sun-splashed day, you have men and women in remarkable shape, with a high-level of confidence (or as Bill Raftery would say, 'Onions'), doing something that not too many others are capable of doing.  Mix in the sun, locale, scenery (both on-track and off), and I think you wrap up nearly everything that IZOD is attempting to market.

Last year's Honda Grand Prix of St. Petersburg was among the top street/road races of the 2009 IndyCar season, setting the tone for another exciting season.  Hopefully, the 2010 edition will take the momentum and enthusiasm from Brazil and carry it over to Barber (which as a first-time track, will definitely have some story lines and buzz about it).
Posted by BP at 9:45 AM No comments:

For all of the hand-wringing over starting the 2010 Izod IndyCar season outside of America, Brazil proved to be one of the most intriguing and fun circuits the IndyCar Series has rolled out in years.

You had it all in the São Paulo Indy 300 - a Carnival-like atmosphere in the crowd, a ridiculous start (complete with clown music), passes for the lead (that happens on road/street circuits?), gaffes, late passes for the lead (again, this happens?) and comeback stories galore.  Again, what's not to like about Brazil?

How I See It

I'll keep the predictions short and to the point.  In any case, here is how I see the 2010 Izod IndyCar season shaking out:

Let's be honest: with all the talk of 2012 and the future of the Izod IndyCar Series, the 2010 and 2011 seasons may be quickly forgotten.

Honestly, at this point, I'd say we've seen more coverage over five proposed chassis than words on the upcoming season.  And with the 2010 IndyCar season beginning at 11:30 a.m. on Sunday (just another excuse to drink in the morning), we're going to talk about chassis, once again.

Brian Barnhardt says in an interview with the Indianapolis Star's Curt Cavin that he is open to multiple chassis in the next generation of IndyCar racing, i.e., the 2012 season.

For all of the teeth-gnashing over the 2012 chassis, many outspoken critics of the process were insistent that the leaders of the Izod IndyCar Series would not listen to the fan when it came to making a choice.

To that, the email I received this morning is a polite was of telling those people "Child please."  Here is the basic text of that email:


The Indy Racing League recently announced objectives for its next generation of the IZOD IndyCar Series chassis - safe, raceable, cost-effective, domestically-built, less mass/more efficient, relevant technology, modern look, and green.  We believe these attributes define the sanctioning body's goals in developing the next iconic car as part of the bright future of our sport.

As a valued member of IndyCar Nation, the league would like to ask for your input on the future chassis as we continue through the research phase.

Now, while this survey may just be available to Indy Downforce members (of which I am one), sign up is easy by visiting Indycar.com (though there are no guarantees you'll be able to participate in the survey if you register now).

Regardless, kudos to the Izod IndyCar Series for reaching out to their fans and taking into account their opinions as they work to reach a decision on the future of the series.

I was getting ready for work this morning when I heard it.  On ESPN, no less.

It was one of those tangible moments when you realize that having a title sponsor who is willing to pour money into the promotion of the sport really helps.  I knew this after watching the AFC and NFC Championship games, when both featured flashy ads for the Izod IndyCar Series.

And this morning, I was reminded as to why Izod is such a good partner for the IndyCar Series (along with the merchandising potential).  A 1-minute (well, it seemed like a minute; it easily could have been 30 seconds) commercial for the Honda Grand Prix of St. Petersburg.

The ad contained the usual Izod flashiness, but also continued to assert a fact that I believe to be critical to the future success of the IndyCar Series: that IndyCar racing contains the fastest, most exciting racing on earth.

Yes, it is nice to have the race on ABC, where it no doubt will receive more publicity on ESPN than races on Versus.

But with Izod standing alongside it, the IndyCar Series is in a much better position to reach a wide-ranging audience, and continues to demonstrate that they want to work with and promote the Izod IndyCar Series.
Posted by BP at 9:44 AM 5 comments:

These arrived today (well, not this exact one. That would have cost an arm and a leg to ship, I would imagine).

In a familiar light blue envelope, 8 tickets appeared.  Paddock, just a row from the aisle, as they always have been.  Just south of the start-finish line, so I can see from the exit of 4 to the entrance of 1.

And with them in my possession, I can now begin preparations for the 2010 Indy 500.  And begin preparing my liver, both physically and mentally.

I'm going to start a rumor, or maybe just take a slightly educated guess on a driver announcement for Andretti Autosport.

On March 1, the team tweeted:


Headin to the doctor. Need to get a checkup on somethin. Busy day today.

Then, today (or close to midnight this morning), Rahal tweets again:


I just want everyone to know Randy Bernard is great! He has helped more in the past 12 hours than anyone ever before I think!

With Andretti Autosport due to make their announcement by the end of the week, could it be possible that on March 1, the team reached an agreement with Rahal and had him get another physical from a doctor?  Seems possible to me.
And since coming on board March 1, could Randy Bernard have been efforting to secure additional sponsorship for Rahal?  Also possible.

Now, do I have any evidence of this, other than what I have read on a few twitter accounts?  No.  Not even close (other than some circumstantial evidence that Andretti Autosport is the home for American drivers at the moment and the team has Izod's support behind it.)

But if I read the tea leaves correctly, you heard it here first.
Posted by BP at 10:44 AM 2 comments: