It's Time for a New Hall of Fame 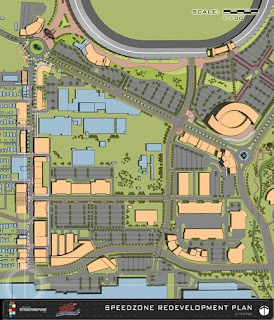 With NASCAR opening their shiny, $195 million Hall of Fame this week, and the gates of the Indianapolis Motor Speedway opening to racing for the first time in May later this weekend, it seems appropriate to examine what is becoming a need for American open-wheel racing - a new museum.

Look, I love the Hall of Fame Museum.  Let me say that first and foremost.  But, to anyone who has seen the facility over the years and visited other sports' Halls of Fame, I think it is readily apparent that a new, larger museum would be a boon for the IZOD IndyCar Series and IMS.

With Speedway, Indiana, in the midst of their biggest (and most important) redevelopment since growing up around IMS, both the town and the IndyCar Series have unique opportunities for growth.

For Speedway, the development projects are an opportunity to revitalize local businesses and bring in new business; Dallara has committed to build the new IndyCar chassis in Speedway, should their design be chosen, and I have heard that the Speedway Redevelopment Commission has talked with other manufacturers as well, in order to bring more racing business to the town.

For the Indianapolis Motor Speedway, the development project will hopefully energize an area around the track that is sadly, lacking, to be honest.  Aside from Main Street in Speedway, the local businesses near IMS consist of strip clubs, liquor stores and trailer parks (not that there is anything wrong with any of those businesses).  The redevelopment of Speedway gives IMS a chance to recreate the areas surrounding the track and turning 16th and Georgetown into a tourist destination year-round, not just three times a year.

If you look at the renderings from the Speedway Redevelopment Commission, you can see exactly where a new museum would fit in the landscape of a redeveloped Speedway, Indiana.  For those unfamiliar with the project, 16th Street, which runs along the south end of IMS, would be rerouted further south, basically behind where the IZOD IndyCar Series offices are today.

Two rotaries would be installed - one where 16th Street would hit Holt Road (near Turn 2), and one where 16th Street, Georgetown Road and Crawfordsville Road presently meet.  While the rendering shows a large building outside of Turn 2, no building has been announced for this site.  This is where I propose a new, state-of-the-art Hall of Fame would go.

This new Hall of Fame (which would sit in this area along with relocated IMS and IZOD IndyCar Series offices) would help bring open-wheel racing fans to Speedway on a more consistent basis.

Ideally, the Hall of Fame could be paired with a higher-end hotel near the track, giving fans an alternative to staying downtown, renting an RV, or taking their chances in the hotels down at I-465 and Crawfordsville Road.

No offense to the present Hall of Fame Museum, but it is outdated and can feel cluttered at times.  For those who have seen the museum basement, they come back raving about the hidden treasures and cars of IMS.  Why not expand the space and bring all the sights to see to the museum floor?  It seems to make good marketing sense to me.

Most museums today have interactive booths, allowing participants to get the experience of participating in sport.  For instance, the NCAA Hall of Champions has an exhibit allowing fans to see what a 100-mph tennis serve looks like and another giving fans the opportunity to kick field goals.

An IMS Hall of Fame Museum of the future could host a wide variety of interactive games - from racing simulators to pit crew competitions to allowing fans to record their own calls of historic IMS moments - all of which would allow fans to grow closer to the sport they love.

Yes, being able to see Arie Luyendyk's 1990 Domino's Pizza livery is cool, but imagine being able to sit down  in a chair and race against the 1990 Indianapolis 500 field, or any other race from the track's 100 years.

Not only would fans have an opportunity to learn about the rich history of IMS and open-wheel racing, the Hall of Fame Museum would continue to house cars and motorcycles from other races at the track, enriching the historical relevance Indianapolis holds in racing and automobile circles.

The Hall of Fame portion of the museum could also be expanded, allowing for more detailed biographies of those in the Auto Racing Hall of Fame and for the Indianapolis 500 winners.

For A.J. Foyt, for instance, not only would his Hall of Fame plaque highlight his four Indy 500 wins, fans could see all four cars in one spot; Johnny Rutherford's three winners could go near his plaque as well.  Or the Hall of Fame could have a room devoted to four-time, three-time and two-time winners of Indianapolis.

Booths would give fans the opportunity to pull up a narrated highlight reel of any race at IMS, dating back to 1909.

Any Hall of Fame should reflect the rich history of their sport; I would say that while the IMS Hall of Fame Museum certianly does this, the time is right to expand.  After all with the 100th anniversary of IMS around the corner, the time is now to make sure all comers to Indianapolis gain a full appreciation for the sport.
Posted by BP at 9:43 AM