With the holidays approaching, I figured it would be a good time to take a look at some of the gifts to give the IZOD IndyCar Series fan in your life.  So, without further ado, here are a few items that might bring some smiles around the Christmas Tree (or Menorah).
For the gentlemen out there, I would highly recommend a Centennial Era Indianapolis Motor Speedway watch. There are three options to choose from, including your very own Tag Heuer (still sponsoring Tiger Woods) Indy 500 model watch.

Too expensive, you say? Keep in mind that the Tag Heuer watch (at right) is marked down from $1450 to $1000, a 31-percent savings from the original price!

Still too rich for your blood?  Fair enough.  IMS is offering two Fossil watches for under $100, which will make the checking account much easier to manage this time of the year.

Men, if you'd like the lady in your life to show a little more flair around the track, the IMS online shop has some items for you, too.


Besides the typical t-shirts and hats, the shop has a selection of pendants, earrings and necklaces for you to choose from to adorn the ears and neck of your spouse or girlfriend. 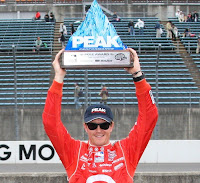 So now you have the drivers' watch on your wrist, but you're still feeling not quite like your favorite race driver?  Fear not, we've got just the ticket that will turn heads at the track: drivers-style sunglasses.  Want to feel what it's like to look out on a crowd the same way Scott Dixon and Graham Rahal do?  This is your opportunity.


Since Oakley sponsors both of the drivers we mentioned, we'll stick with the Oakley motorsports models.  With the sunglasses, all you need to do is work up an intense sweat and then find someone with a camera to interview you, thereby allowing you to experience the same rush and feeling of protection that IZOD IndyCar Series drivers feel on a weekly basis when they cover half their face while doing a post-race interview.


If you're really looking to complete the driver look (and with the watch and sunglasses already taken care of, why wouldn't you?), Oakley also offers full driver's suits, shoes (for both the driver and pit-crew member in your life) and base layers.  Because a stocking that doesn't have a balaclava in it this year will ruin Christmas.  Mark my words.

The 2009 IndyCar season was marked by the return of Dario Franchitti to the track, culminating in his championship.  Displaying some flowing locks that, in combination with his Scottish brogue, only added to his level of attractiveness on the circuit, Franchitti will surely be a trend-setter entering 2010.


My advice?  Get started now.  Forgo your usual hair maintainence, stopping only for an occasional trim.  You may want to attempt to convince your facial hair to grow at an obscene rate, leaving you with a 5 o'clock shadow at noon. 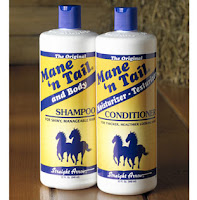 Now, once your hair is grown out, you'll need something to keep those locks looking good.  You'll want to put Mane and Tail on the Christmas list in advance, because once everyone starts growing their Franchitti hair, this stuff will go like hot cakes.


Plus, if it works for Chaz Michael Michaels, it can't be bad.


We all know that the IndyCar season tends to leave us fans with little to do in the winter, besides venturing to the IMS Museum's basement as part of a Tweetup (bloggers and Twitter users in a basement?  Shocking, if you believe how some media members view both formats) and praying that E.J. Viso will join Ganassi Racing.


But now that you're acting like a real-life IndyCar driver (shunning fans like Marco Andretti - who hopefully is turning the corner - is optional) with your watch and sunglasses, it's time to step it up with iRacing.com's simulator.  Good enough for Ed Carpenter and several other stars of the IZOD IndyCar Series, iRacing is the foremost simulator of real-life track action currently on the market.


And with a reasonable subscription rate, you are one year of solid practice away from actually being as qualified as Milka Duno or Dr. Jack Miller to actually try and drive a real-life IndyCar.


Once you've sat in front of your computer and simulated racing, it might be time to actually see how 175 mph feels (sure, it's not 220, but it's still faster than most NASCAR races).  Sign up for the Indy Racing Experience.  They offer both two-seater and single-seater rides.  One of these days, I'll get my laps in at the Indianapolis Motor Speedway - it's on my list this year.


Now, for those of you who don't want to pony up for iRacing, the Nintendo Wii offers a small-scale version with Indianapolis 500 Legends.  Long for the 1960's-era 500, with A.J. Foyt, Al Unser and OilPressure.com's personal favorite, Parnelli Jones?  For about $30 (the cost of the game, shipping and a Wii wheel), you can sit in front of the TV, ignoring family members as you whip around the yard of bricks.  Or, better yet, bring the family in to the game and wreck them as you dominate the Brickyard, holding it over family members for the entire holiday.


Finally, there are several fine retailers (Indycar.com, IndianapolisMotorSpeedway.com and the individual team web sites) offering discounts on merchandise this holiday season.  But for me, there is only one place to turn - Macy's.  Their IZOD for Indy collection is down to four items left, so if you want any first-season merchandise, hop on it quick.  You'll have to wait until March for these new items.